Dreaming of jetting off on a holiday and exploring the world? Well, you can travel with your taste buds without even leaving your home, we’ve rounded up some of our delicious recipes inspired by dishes around the world which will satisfy both your want to travel and your belly at the same time!

The croque monsieur originated in France and you can find one on most café menus around the country. It’s the French version of a cheese toastie. The title comes from “croquer”, to bite and “monsieur” meaning mister literally translated to a gentleman’s sandwich. It is made of simple ingredients found in any French home; bread, cheese and ham. It had featured on menus in Paris as early as 1910 and some say the sandwich was created entirely by accident when French workers left their lunch pails too close to a hot radiator, and the heat toasted the bread and melted the cheese in their sandwiches. You can try a Clonakilty twist on this dish by using our white or veggie pudding. Check out the recipe here

A delicious deep-fried chickpea ball that is commonly paired with hummus and enjoyed by vegetarians and foodies alike! As a street food, falafels are often eaten in pita bread but can also be part of a colourful mezze assortment. It all dates back about 1,000 years ago to the Egyptian Copts who brought a version of falafel with them from the middle east known as ta’amiya which was made out of fava beans. The Jewish pioneers took this and created their own version of these tasty fritters using chickpeas. This is what we know today as a falafel. You can try our meat version of these tasty morsels of goodness using Clonakilty Whitepudding or stick to tradition with the veggie version using Clonakilty Veggie Pudding.

Huevos rancheros or Eggs Ranch Style is one of the most popular Mexican breakfast dishes. As the name suggests this dish originates from ranchers who were served dishes like this at ‘almuezo’, a second breakfast enjoyed by the farm-workers after early morning tasks. It’s both hearty and filling, and also simple to whip up making it the perfect comfort food. Traditionally this dish is made with eggs over a flat tortilla and topped with ranchero sauce, refried beans, salsa and cheese. Most places with Mexican influence have a version of this dish, some regions change ingredients and add other components to make it their own. The Clonakilty twist on this dish includes our delicious tasting black pudding. You can find the recipe in our black and white cookbook available to buy here.

Larb or laab is a meat salad seasoned with fresh herbs usually described as a type of cooked salad. It is believed that the dish is originally from Laos, but it is also popular in many regions of Thailand, as well as being present on the menus of Thai restaurants around the world. It is very easy to adapt this dish as there are many variations of Larb. It can be made with pork, fish, chicken, duck, buffalo or beef. Nowadays you can even find vegetarian versions including our Vegan larb salad made with Clonakilty Veggie Pudding. You can find the recipe here.

Eggs Benedict is a quintessential breakfast and brunch classic whose origins are massively debated. The birth of the ‘eggs benny’ is in the United States, more precisely in New York, between the end of the 19th and the beginning of the 20th century. But, who invented it is still unknown to this day as several claims for its creation have been made by different “Benedicts”. It consists of an English muffin topped with cooked ham, two poached eggs and a generous portion of hollandaise sauce. You can check out our version here using Clonakilty Traditional Dry Cure Rashers.

Another Mexican classic dish, tacos consist of a folded or rolled tortilla filled with various mixtures including beans, chicken and mince. The origins of the taco are difficult to pinpoint, some say the finger food dates back to the silver mines of Mexico in the 18th Century. The word taco was used by miners to explain the charges used to excavate the mines, made from pieces of paper, wrapped around gunpowder and inserted into holes in the rock. They have since been Americanised, and many new variations created over the years and sold all over the world. Check out our black pudding taco recipe here.

Cuisine around the world with Clonakilty 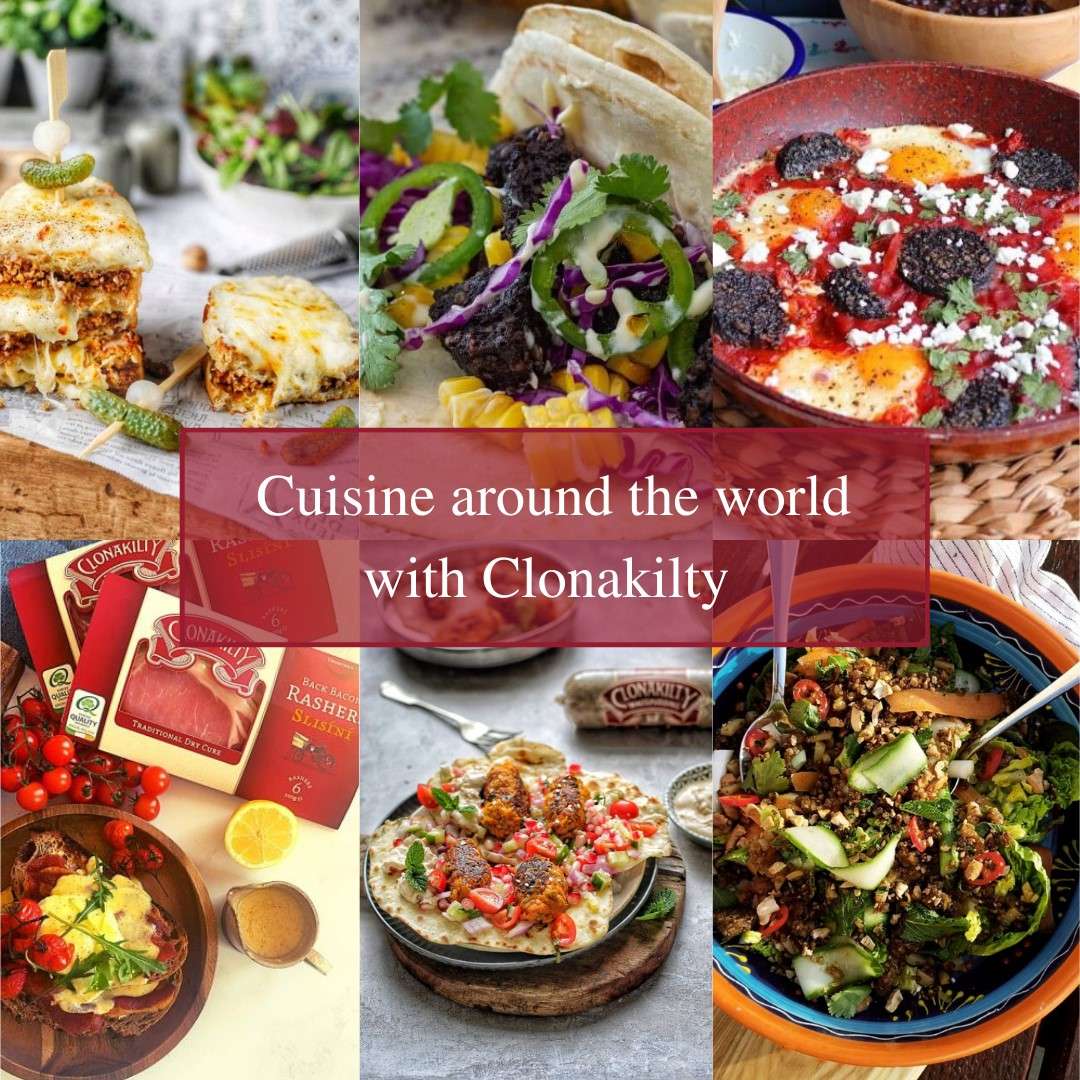